In biology, symbiosis is the name given to a mutually beneficial relationship between two or more organisms. Without this relationship, both may die, or at least not grow and reproduce as successfully.

A recent article in Science, “Sulfur Oxidation Genes in Diverse Deep-Sea Viruses”, details this relationship in the novel findings of a University of Michigan group that studies viruses found in the deep ocean. Upon sampling hydrothermal vents, chemolithautotrophic (oxidize inorganic compounds and carbon from carbon dioxide for energy) sulfur-oxidizing (sulfur>sulfite) bacteria were collected. As deep-sea bacteria do not have access to sunlight (and photosynthesis), they rely on oxidized sulfur as a key component of energy generation processes. These bacteria were then genetically analyzed for viral sequences, and those sequences were analyzed to predict protein-coding areas. Surprisingly, 18 viruses were found which encoded genes that are necessary to oxidize sulfur, an important step in the energy generation process. The authors’ suspect that bacteria with multiple infections of these viruses may cause a selective advantage to their bacteria hosts; increased metabolic enzyme levels may increase cellular energy. Unfortunately, these bacteria cannot be cultured, so confirmatory tests are not possible.

People generally think of viruses and infections as obstacles to a healthy life. Most commonly known viruses are more akin to plagues than agents of prolonged life, such as HIV, Ebola, Polio, Influenza, etc. No good will come if you’re exposed, and untreated. However, it’s a long known fact that there are thousands, if not hundreds of thousands of different viruses that infect mammalian species, including us, which have no obvious detriment. The whole field of paleovirology has been built on tracing the existence of endogenous viral elements (EVEs), and where they came from. For example, 42% of the human genome is made up of retrotransposons (integrated retroviruses), with LINE-1 virus integrations accounting for 17% of the human genome (500,000 integrations). However, only a fraction of these are capable of active transcription (RNAs are produced from the genomic DNA). Other examples of non-human endogenous invaders include our mitochondria, which provide the vast majority of cellular energy. They integrated into other cellular organisms around 2 billion years ago, and are largely responsible for powering the ability of cells to form multicellular life.

As a side note, the viruses are members of the bacteriophage family, which are the coolest-looking viruses: 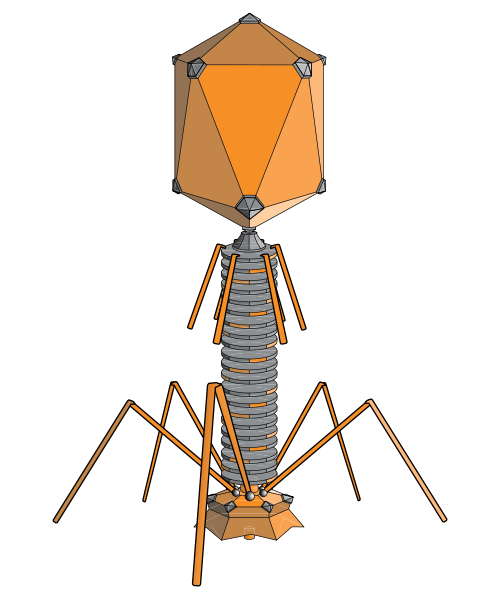