Wednesday, 10 August 2022
You are here: Home Sex and Research Administration

Or, more accurately, Gender and Research Administration – but then, that wouldn’t have grabbed your attention nearly as much! 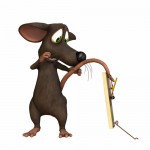 A recent post by David Grimm in the ScienceNow blog over at the AAAS Science website caught my attention. The original research paper David writes about was published in Nature Methods this week. As noted by Jeffrey Mogil and others, the presence of a male researcher (or even a man’s T-shirt or bedding material from other male mammals) reduces pain in mice and rats. A similar effect was not found with female researchers or clothing/bedding from females. The immediate implication here is that this could cloud myriad research results that include evaluation of pain in mice or rats as a criterion – the gender of the investigator doing the experiments may have unknowingly influenced the outcomes.

Mogil and his team suspect that the mice and rats are instinctively reacting to male scents, which are inducing a physiological stress response that results in stress-related analgesia and thus less pain. Because the rodents do not have the same physiological response to female scents, the presence of females does not result in the same pain reduction. Stunning!

Naturally, this got me wondering if there were implications here for research administration. If – and there is no evidence this is the case – humans react instinctively in a manner similar to that observed by Mogil in rodents, could we leverage this finding to make the process of research administration a little less painful and more productive by mindful staffing decisions?

Would a research administration office where painful news was presented to investigators by or in the presence of a male administrator reduce the pain? Should female staff be positioned in frontline positions on stressful submission days to lower overall stress levels? Of course, if you decide to test this out, you’ll need to get IRB approval first.