Sunday, 14 August 2022
You are here: Home Reefer and Research Administration 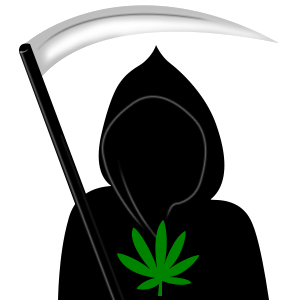 The word should have been “Reaper” not “Reefer”.

I realized this faux pas the other day when I was in a GoToMeeting session and we were having a very lively discussion and it abruptly became uncomfortably quiet.

I was sharing my desktop so others could see what I was presenting on my computer and we were all exchanging ideas pretty rapidly and all of a sudden as I was flipping through the screens the conversation completely halted.

The silence was obvious and at first I thought that we had been disconnected but this was not the case as attendees did confirm they were still on the call when I prompted them.  I trudged on but the vibe was definitely shot.  A few more slides in I realized that my email Inbox was open behind the main screen and it is not something I usually care about as there is nothing to write home about or controversial to be found there.  Then I saw it.

“Pick up Reefer after work” was the subject of the top email in my Inbox. Yikes! Well that was most likely the conversation killer.

When he was an infant I was joking one day and said that he needed to have a tough name, not Boo, so I started calling him “Reaper” figuring you can’t get tougher than that! “Reaper” stuck and I call him that as do most of my family now especially when they are talking to me about him.

I was responsible for picking him up after work that day and I did not want to forget so I used Siri (iPhone’s voice recognition tool) to send myself an email to remind me to swing by and get him on my way home.

“Pick up Reaper after work” was what I spoke out loud but Siri turned it into “Pick up Reefer after work”. Apparently I did not notice the awkward translation/recognition until everyone else did.

Because I certainly could not let it lie without providing clarification I gave them the Reader’s Digest version of the meaning behind the note. This was too fantastic of a story for them not to believe and we had a good laugh over it and so did some of my team when I told them about it after the fact.

I now refer to this type of faux pas “The Reefer Effect”. As I always seem to do I began thinking about this effect and how it might apply to Research Admin.

My favorite miscommunications are when people post something on these forums like “We are looking for a Research Administrator at XYZ University” and then someone, not realizing they are emailing the world, will respond back to the thread including everyone on the forum with a note that was intended to be personal.  Awkward….. The apologetic follow up is always painful and I truly feel for the respondent.

The other day someone asked me for help filling out an FP4. I did not know what that was and doing my due diligence I scoured the internet and federal regulations and could not find anything. This person who had asked me for help made it sound like it was a simple question.

Eventually I had to ask them “What is an FP4?” and they said “Form Page 4”. Well this is part of an old PHS 398 Application form set and I am very familiar with it. The question was indeed easy and I was able to help them out in a fraction of the time I spent looking for the definition of an FP4 online.

I had another similar experience when one of the information channels I was monitoring had someone post “I am dealing with a subaward to Massachusetts and  I can’t find in A-110 when and how suspension might work if…..”.

Well I panicked and thought that they abolished A-102 and combined it with A-110. I went refiling through federal websites, OMB, etc. looking for this change. After an hour or so of feeling like I did not know what was going on I got saved when someone posted “A-110 covers subawards from states but not to states”. Whew. Once again I was saved. As it turned out the question was supposed to be “I am getting a subaward from Massachusetts” anyway. BIG difference.

Miscommunication can be a tremendous waste of time and generally happens when people try to communicate too quickly.

One of my favorite quotes is “The single biggest problem with communication is the illusion that it has taking place” by George Bernard Shaw. Each time I encounter one of these faux pas this saying comes to mind.

In thinking of the colleagues and clients I interact with frequently mostly from the UK, Middle East, Australia, New Zealand, and South Africa do not seem to have miscommunication problems to the extent that we seem to and I attribute this to less rushing to communicate. In my observations of interactions they take pause and then respond accurately and with clarity. I have been trying to do that more and more and I hope I am more effective now as a result.

I think it is an interesting theory and I wonder how our world might change if our industry colleagues applied the “Reefer Effect” out of Research Administration.