Friday, 9 December 2022
You are here: Home When is a Giraffe merely a Giraffe?

I recently ran across an article that stopped me in my tracks with this statement:

A United Nations report on Asian higher education has questioned the widely held belief among policymakers that investment in university research leads to economic growth.

Cue the music – I feel a Paradigm Shift Approaching

As embedded in that statement, it is indeed a ‘widely held belief’ that investment in university research leads to economic growth. In fact, it is far more than a ‘widely held belief’ – it is a key assumption in virtually every conversation about research support going all the way back to the days of Vannevar Bush and his 1945 report to then President Harry Truman, Science, The Endless Frontier:

How do we increase this scientific capital? First, we must have plenty of men and women trained in science, for upon them depends both the creation of new knowledge and its application to practical purposes. Second, we must strengthen the centers of basic research which are principally the colleges, universities, and research institutes. These institutions provide the environment which is most conducive to the creation of new scientific knowledge and least under pressure for immediate, tangible results. With some notable exceptions, most research in industry and Government involves application of existing scientific knowledge to practical problems. It is only the colleges, universities, and a few research institutes that devote most of their research efforts to expanding the frontiers of knowledge.

The economic value of university research was the focus of the STAR METRICS article in Science that I wrote about here in April.  Julia Lane and colleagues in the STAR METRICS program demonstrated the impact on jobs and other short-term economic impacts of university-based research programs, and look forward to future opportunities to evaluate longer-term impact.

So, it is no wonder that I was taken somewhat aback by the lead statement in this 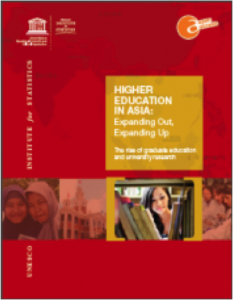 article. The Times Higher Education article references a UNESCO report published last month, Higher Education in Asia: Expanding Out, Expanding Up. In the UNESCO report, the point is made that while in developed nations like the US, Europe and Canada, the link between university-based research and economic growth is accepted, that this assumption may not play out fully in other nations.

The report specifically looks at conditions in middle-income countries in Southeast Asia including Malaysia and Thailand, and focuses on the changing landscape of higher education in these countries. The central thesis is that as increasing numbers of students seek advanced education, countries need to build university capacity – both in terms of facilities and faculty. This higher education capacity building necessarily includes developing graduate education programs to staff the burgeoning university complex, which means building research programs that are generally perceived to be engines of innovation that can spur economic advantage for the country. While the long term economic benefit from basic research is clear in the US and similar countries (see a list of some payoffs from basic research in the US here) the benefits often are realized many years downstream from the basic research that spurred them. Countries striving to build recognition and stature today usually have limited private sector capability for absorbing technology spin off from university-based basic research programs and are also looking for quicker results to build the stature of their programs. This may lead to a focus on applied research, where the economic benefits may be realized more quickly.

So, my paradigm has not really shifted after all – but my horizons have been broadened. In some early undergraduate course in biology I was introduced to the concept of lumpers and splitters; a concept which apparently was first used in print by Charles Darwin (according to Wikipedia). I am inherently a lumper. I tend to look for patterns of similarity and disregard differences that could be used by those with a tendency toward splitting to distinguish one category or situation from another. I see one Giraffe with many variations; others document 11 or more distinct species of Giraffe.

Certainly all countries are not the same and the varying cultural, economic and political realities in each country drive pervasive differences between them. That such factors also influence the development of higher education and the research milieu are not actually novel concepts to me, however, they are indeed factors that I now realize my inherent lumping tendencies have inadvertently trivialized.

While I doubt that was exactly the goal of David Matthew’s lead paragraph in his Times Higher Education article, and while the statement itself may be a bit bold based on my own reading of the source UNESCO report, I applaud him for making me think. Thank you, David!