Sunday, 27 November 2022
You are here: Home Checking in on the DATA Act

It’s Not Dead Yet!

Now that the rush of the Feb 5th NIH deadline has passed, you might be reflecting on big picture things – like the 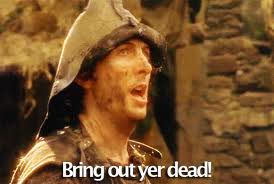 OMB grant reform changes, or wondering ‘what’s going on with the DATA Act?’

With props to Monty Python, let’s explore what’s going on with the DATA Act, which is definitely ‘not dead yet’.

Digital Accountability and Transparency Act (DATA Act) bills are currently working their way through both the US House of Representatives and the US Senate. Successor in many ways to the American Recovery and Reinvestment Act of 2009 (without all the grant funding, of course!) and extending the Federal Financial Accountability and Transparency Act (FFATA), the DATA Act is broadly designed to establish consistent data standards across government agencies, enhance transparency and availability of data through consolidating consistent data from all agencies in a single accessible web site, and improve fiscal stewardship through the use of expanded analytics to ferret out waste, fraud and abuse.

More specifically, HR 2061, the House version of the DATA Act, which passed the House of Representatives on Nov 18, 2013, according to the summary provided on GovTrack, “would require the Treasury Department to create government-wide data standards for agency financial reports, payments, budget actions, contract reporting, and grant reporting, direct agencies to use those data standards, and mandate that information be published online.” The House bill would require all agencies to use consistent data standards to improve accessibility of the data It would expand the function of the Recovery Board’s responsibilities to using advanced analytics to identify potential waste, fraud and abuse across all federal spending.

The White House has Reservations

While acknowledging widespread agreement on the principles espoused in the House bill, Dick Gregg, fiscal assistant secretary at the Treasury Department recently said, “I think the DATA Act, not only on transparency, but if it passes, on data standards, will be difficult to implement.” This reflects the concern that applying the requirement for data standards across all federal agencies will be a substantial project with significant costs due to the myriad data systems involved and is at least part of the reason why the Obama Administration has proposed changes to the companion Senate bill that has yet to make it to the Senate floor for a vote.

According to a report by Federal News Radio, the Office of Management and Budget (OMB) has proposed several changes that many perceive would substantially undermine key aspects of the legislation. In particular, by requiring agencies to publish their spending information using open data standards but dropping the requirement for the implementation of consistent data standards across all agencies and publication of spending data through a single website, the Act would lose much of its impact in improving transparency, according to a statement by the Data Transparency Coalition (DTC). Sen. Mark Warner (D-VA), one of the sponsors of the Senate bill along with Darrell Issa (R-CA), has issued a press release condemning the proposed White House changes to the Senate bill.

There seems to be continued interest in moving the DATA Act forward, but it remains to be seen whether things can be moved forward before congress becomes engulfed in the 2014 mid-term elections making any sort of compromise – even on a bill that most seem to agree is meritorious on its face – remote.