Wednesday, 10 August 2022
You are here: Home Beat Of A Different Drummer 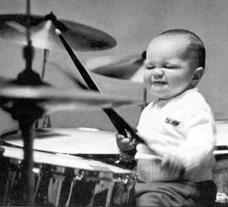 I know I have mentioned that I have 5 kids. The two youngest are now finishing up high school. Last week, I attended their school concert. I started attending these concerts when my youngest was in the 3rd grade. Seeing my girls participate in these reminded me of when I was in high school concerts, some thirty or so years ago. Little has changed from my recollection.

I remember that in many ways it felt like a rock concert. The parents crowded around doors as they wait to get into the theater. They push, shove and invade other peoples’ space while giving each other dirty looks. I don’t understand it. These moms and dads have all been to countless concerts before, probably  as many as I have and they know what to expect, so what is the rush?

Once the doors are opened the parents run into the auditorium, De Ja Vue takes over as the majority of the mob sits in the back rows. Feels like high school all over again. All of the cool parents claim the back of the room and leave just as quickly as they entered when the show concludes.

Each and every show brings its own memorable event like the time the auditorium lights were broken. Their solution was to direct the spot lights at the audience which made it feel like we were being abducted by aliens as we entered the theater to claim our seats. As I walked closer to the front of the room I had to shade my eyes as I half expected to be beamed up inside the craft. Fortunately, that did not happen and I was able to claim a seat in the front row. Sitting up front made it easier for my kids to spot me in the crowd.

As the kids walk out onto the stage none of them seem to really know where they should sit. It always seems like there is a shortage of chairs as the kids rush to get a seat. Maybe this was how musical chairs was invented (pun intended).

All of the boys wear ties that are just not right. They are too long, too short, terribly tied and/or look like they are from the early seventies. It makes me question what some parents perception must be in regards to ties. If a tie worked on their son in the third grade it likely will not work when they are seniors in high school.

The girls must all have a secret rule that they cannot wear a skirt the same size or style as any other girl on stage. To them this concert is all about looks and less about the music.

The seventh and eighth graders are the most interesting to me. The differences in the kids is huge.  Some boys looked like they should be playing with crayons while others look like they just got out of prison. Some girls with pigtails and others who look like they want to be runway models.

Back to the concert.

The conductor walks out onto the stage in the Gym-a-Caf-a-Torium. Apparently he is allowed to wear a suit that actually fits him, a tie that is the correct length; that was made in this decade and is properly knotted. He is the only person on stage that fits in his clothing.

He raises his hands and the band members start playing scales to warm up. Once they finish their warm up, all of the parents applaud. They cant tell the difference between the warm up and the impending music.

This is not the first time they heard this. They have attended nearly every concert this group has had for the last 10 or more years.

The conductor queues the group to smile by pushing both sides of his lips up with each pointer finger. The expression of the kids turns from distain to one of contempt with smirks at best.

On a side note, I am trying to write this article by using voice recognition software. I think I am spending more time correcting the words it thinks I am using than anything else. I do find that it does an amazing job capturing what I say when I curse at it and I have to admit that the third grader in me finds that feature quite amusing. (It works on every curse I have tried FYI).

They start the first song.

I have to smile because I am in the front row basically alone able to see everything. Remembering that I use to play in a band like this when I was their age, I began to notice a lot of things other people and parents may not have noticed.

Most of the kids are tapping their feet to keep time. Interestingly no two feet are moving in unison. They seem to have a domino effect; one foot taps, then the next and the next.

I notice that the ‘cool’ kids are in the back of the group. Just like on the school bus, in the classroom or like the parents in the back of the room now. The kids in the back generally play percussion instruments, an easier job. You get one or two notes a song and the conductor even points to you so you don’t forget when to play it! One of the kids stands in the front of the xylophone, again looking very cool but he never actually plays it. He seems to be staged there, leaning over it, waiting, waiting for the note that never comes. I wonder if he thinks that is good or bad. On one hand he doesn’t really have to practice and he cant screw the song up, but on the other hand he may know that he is not needed. So he just stands there looking as if his part will come. (At least he is not texting like his friend in the back is).

One of the kids is sitting behind an actual drum set. He is the coolest kid on the stage, complete with dark sunglasses! He looks tamed however, as if he wants to play Metallica but instead has to use brushes to swirl on the drums heads. He is dying on in the inside.

The girls in the front playing flute have no place to hide. They are in the spotlight.(Except in this show because they’re pointed at their parents)

One of the girls is faking it. Her fingers are not even moving. She is just watching the others so she knows when to pick her instrument up and when to put it back down. When they do put the flutes down each kid does it differently. Some lay them nicely across their lap. Some lean on them like they are canes. Some swing them over their shoulders like they are guns. My favorite are the ones who hold them like swords.

It’s funny to watch when one kid goes to turn the sheet of music to the next page.  The other kids stops them. She’s not done playing that page yet.  She is frustrated that her stand mate got through the sheet of music before she did. She must be showing off. This girl still has a couple more stanzas to play through. Did I mention to you there supposed to be playing the same music? It’s not a race. Then again they are tapping at different paces so I guess them not finishing at the same time is to be expected.

As each song ends each kid puts their instruments down in unison. It reminds me of taking a test signifying that you have completed your test when you put down your pencil. Or when the teacher ends the testing time and you all have to put down the pencil immediately.

Eventually the concert is over. The kids run off  of the stage just as quickly as they ran on and at the same pace their parents run out of the auditorium.

Then it hits me.

The band is a collection of numerous people all acting as a single group. The sum of their whole is greater than the parts.

The saying “Everyone marches to the beat of a different drummer” is derived from the writing of the philosopher Henry David Thoreau. He wrote:

“If a man loses pace with his companions, perhaps it is because he hears a different drummer.
Let him step to the music which he hears, however measured, or far away.”

His point being that you need to follow your own path but also be a part of a group. There is a need to be able to do your own part but not at the expense of the whole. To be individual without compromising the mission. This is the struggle in my eyes and perhaps in the school conductor’s as well.

A listener is lucky when someone with skills, passion and dedication are a part of the band.

The senior staff and I are the “conductors”. We continuously strive to construct an awesome band. A band that can play proficiently from the same sheet of music and who can also put their instruments down at the same time.

Before any potential employee (band member) can see me to interview they go through a filtering system. When they get to me, I throw them curve balls asking things such as what their passions are. If they admit they have nothing they care strongly about it is not a good sign.

I ask them about their hobbies and interests to try and glean some insight into them. I see if theses hobbies require thought or these hobbies are where they just like collecting small shinny objects. Hobbies will also give you a sense of how introverted or extroverted they are. I ask them their most favorite and least favorite classes. What classes were the hardest/easiest for them.

We search for caring people who should then also care about their work. Its not about people that are good or bad, its about a good fit and a bad fit. A bad fit for us may be perfect for another company or conductor.

It has been a lot of work putting together our current group and we are now really starting to jive. Beautiful music and a better product are a result. The collection of many people playing different instruments has made it all come together. With continuous practice we strive to play better and better. It is a very rewarding experience when everything clicks without missing any notes.

We have assembled a great band, I am very proud of our musicians.